Michael Markowski was barred from affiliating with a broker dealer in the late 1990s by the SEC and the NASD. The disciplinary proceedings that were brought by the two regulators against Mr. Markowski to bar him from affiliation were specifically related to the performing of his duties as the CEO of Global America, a broker dealer during 1990. The firm’s trader who Mr. Markowski supervised was also named in the proceedings and barred.

The primary rationale for the regulators instituting proceedings were allegations that the share prices of the IPOs of development stage companies underwritten by the firm in 1990 had been manipulated. Secondarily, there were allegations that the firm purposely did not execute market orders to keep the prices of the shares from declining. However, the NASD’s Market Surveillance Committee in its 1998 review of the findings ruled that there was insufficient evidence to support the allegation that “sell at market” orders were not being executed.

The market manipulation allegation involved highly technical issues due to the firm’s attempting to make orderly markets in the securities which it underwrote. Markowski’s lawyers had argued that since the trading resulted in a net loss to the firm it precluded a finding of manipulation. For this reason, Markowski filed a petition for a writ of certiorari with the Supreme Court of the United States to appeal the decision. The court denied his request to hear the appeal.

Things to consider and mitigating factors:

Global America was headquartered on Wall Street. Its clients included 12,000 high net worth individuals and 200 European institutions. The firm was considered to be a leading provider of venture capital in the U.S. to early stage companies. The slogan gracing the cover of the brochure was “Future-Shaping through ‘Public’ Venture Capital Investment”. Dr. Arthur Laffer, who was President Reagan’s economist and creator of the famous “Laffer Curve” was a member of the firm’s Board of directors. Below is the price chart for one of Global America’s recommendations, Senior Service Corporation, which underwent a name change to Almost Family. Mr. Markowski was the investment banker who underwrote the IPO for the company when it was a startup. He was the co-author of the first research report and buy recommendation covering the company. The market value of the company has increased by 4800% and its annualized revenue has grown to $800 million. 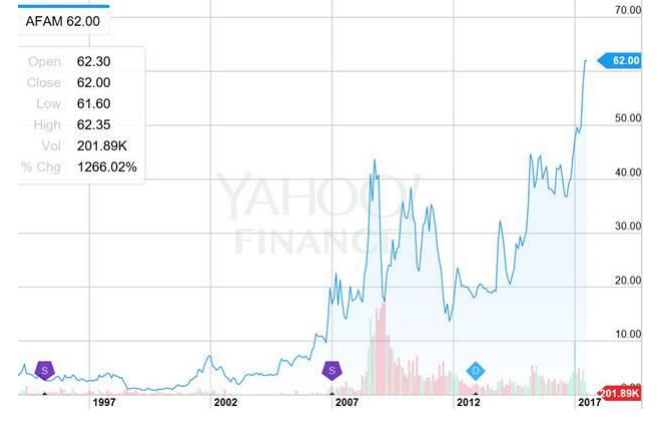