Green PokaDot Box: A Business Model that Ranks Among Most Disruptive

Green PolkaDot Box, Incorporated (GPDB), a recent discovery, has already been added as a recommendation to the Trophy Investing letter.   The company’s business model ranks among the most disruptive that I have seen over the past 40 years.   I became aware of the company, as the host of the weekly Money TV show has interviewed both the CEO of GPDB and me.  Inspired by the company’s concept I made conducting due diligence on GPDB a priority.  After several conversations with its CEO through Saturday May 7, 2016 GPDB was added to Trophy’s buy recommendation list for the following reasons:

Green PokaDot Box was founded in 2008 and is based in Mount Pleasant, Utah.  It operates an “online” membership club that offers natural and organic foods to consumers in the United States. It sells fresh and packaged foods, and other products to health-conscious customers through its Web site, greenpolkadotbox.com.  The company’s digital or online model generates its momentum in two ways: (i) consumer behavior has been rapidly changing to ordering all goods online; and (ii) the growing proliferation of and demand for organic and non-GMO (Genetically Modified Organism) foods.

GPDB has developed an operational online ordering and delivery system that now supports 1800 SKUs.   Even though the company lacks the working capital to fully leverage the systems that have already been developed, it has — nonetheless — already developed the infrastructure that will enable it to disrupt the $593 billion U.S. grocery industry.

Preliminary analysis of GPDB’s model has already revealed that it is both a digital disruptor and a first mover.  The company’s direct-to-consumer online model severely disrupts the entire vendor/grocery store supply chain.  By cutting out the traditional supply chain GPDB is able to provide extremely competitive pricing to consumers.  The elimination of all of the middlemen is extremely disruptive to the industrial economy.

The grocery industry ranks along with the transportation industry as one of the world’s top 10 largest industries.  With the intellectual property and online sales and fulfillment model that GPDB has developed and that is already operational, GPDB is positioned to become the UBER of the U.S. grocery industry.  The 4 minute and 2 second video entitled, “Digital disruptor companies have the potential to get to $10 billion valuations quickly”, below explains the process that digital disruptors (including UBER) must undergo to become successful.  A $10,000 investment into UBER in 2010 was valued for $105 million in 2015.  That GPDB’s digital disruptor model has already been developed and proven is of great value to the company’s shareholders.

GPDB is very rare because it is both a digital disruptor that is also a first mover.  Its digital model enables it to be the first to capitalize from the growing awareness of the importance of organic foods and the health threats associated with the consumption of foods that have been genetically modified and engineered.   The company’s online “health merchant to consumer” revenue sharing model provides it with a huge first mover advantage.  As health concerns escalate, more consumers are purchasing all-natural and organic products priced at a premium in brick-and-mortar stores.  Assuming that it can quickly access adequate working capital, GPDB’s network of health merchants can quickly educate the rapidly growing population of health conscious consumers.  Because of its very disruptive model it can fulfill the needs of this current market consisting of millions of U.S. consumers at lower price points than conventionally grown foods.  The 3 minute and 52 second video below entitled, “Why companies qualifying as ‘First Movers’ have the potential to get to $1 billion valuations almost instantly”, provides information on first movers:

What makes GPDB very special is its CEO, Rod Smith.   The company is not Mr. Smith’s first foray into building a public company from scratch.  He was the founder and CEO of inContact, Inc., which trades on NASDAQ under the symbol of SAAS.  See SAAS price chart below.  For any company to have such a CEO, especially one who previously had the vision to found a highly successful public company that specializes in all areas of communication and management required for unprescident success in GPDB, is extremely rare.  For this reason it is absurd that GPDB’s shares are trading near a 5-year low of $0.25. 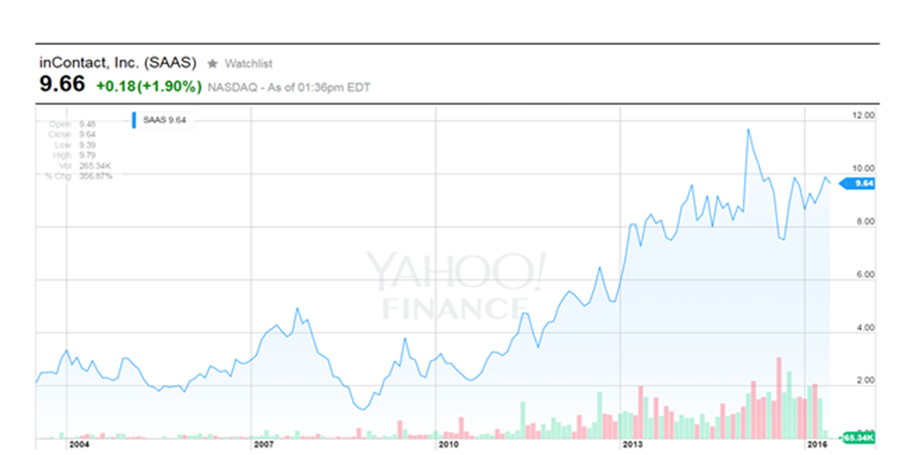 For any company to have such a CEO is extremely rare, especially one who previously had the vision to found a highly successful public company that specializes in all areas of communication and management required for the unprecedented success of GPDB.  It is absurd that GPDB’s shares are trading near a 5-year low of $0.25.

GPDB shares are very illiquid and trade on the OTC Pink, an exchange that specializes in listing penny and small cap stocks.   For this reason, I suggest that limit orders be utilized to purchase the shares.  Additionally, since the company has approximately 10 million shares and 40 million warrants and options outstanding that are exercisable at prices of $0.50 and above, I recommend that for the time being investors utilize a price limit of $0.50 per share.   Upon my conducting additional due diligence, or should the company announce new developments the probability is high that my recommended limit price will be raised to above $0.50.

From my 40 years of experience in the financial markets I can unequivocally state that the best opportunities for an investor to make ten times their money over periods of 5 years, or less, can be found among those companies having shares trading on off-the-beaten-path exchanges.  The 4 minute and 43 second video below entitled, “Free Cash Flow Investing” reveals details about my simultaneously discovering and recommending two companies with share prices below $1 per share.  The shares of both companies were very illiquid and were not trading on the NASDAQ or NYSE when I found them.  Less than five years later the share prices of both companies multiplied by at least 20 times and their share volumes had increased exponentially.

With the publication of this report, Green Polkdot Box (GPDB), has been added to Trophy Investing’s list of recommendations.  Trophy Investing specializes in discovering and recommending small-cap and low-priced stock investment opportunities throughout the world that have the potential to multiply in price within five years, or less.

Because the share prices of micro-cap and penny stock companies can be volatile — a result of the market for shares of such companies being illiquid — it is suggested that buy price limits be utilized when trading GPDB shares.  Trophy Investing provides an initial suggested buy limit price upon its recommending shares of any company.  Based on changes to the company’s fundamentals, the buy limit share price is raised or lowered by Trophy Investing.

Trophy Investing’s mission is to find and recommend the 100 best micro-cap and low-priced stocks throughout the world.  The shares for any company must have the potential to multiply in price within five years, or less.  Trophy intends on providing ongoing research coverage on each of the recommended companies for a minimum of three years.  Free 30-day trials are available at www.trophyinvesting.com.

Trophy Investing was founded by Michael Markowski, who Fortune Magazine named as one of its 50 Great Investors, to capitalize on the divergence in the markets caused by the passage of the Dodd Frank Act.  From his research Michael concluded that those companies defined as micro-caps, and which have share prices trading below $10, were most recently at their lowest relative valuations since he entered the capital markets in 1977.  The minute video below entitled “Green Polka Dot Box named 1 of best 100 penny stocks to own” explains why the prices of the shares of GPDB and other small companies are absurdly low.